Our brewers have been hard at work. Our packaging team has been hustling. Our art department (I guess you can call it that) have been busy doodling. Our marketing team has been working… harder. Why you might ask? Well, we’re glad that you did as today we’re happy to share some long awaited news with you.
Launching tomorrow, in the GLB retail store at 10am, and stemming from our 7 Barrel Series, will be the first two brands that we’ve bottle conditioned here at the brewery. No Chance with Miranda Saison and Raspberry Universe Saison will mark the beginning of many new brands that we’ll be introducing throughout the rest of 2018 and into 2019.
If that isn’t exciting enough for ya, wait for this next part.
These new beers have been undergoing secondary fermentation in, yup, you guessed it, bottles (get it, bottle conditioned). And not 650ml bottles. Nope. Not even 500ml bottles. No Chance with Miranda and Raspberry Universe will mark the beginning of yet another adventerous side of GLB in 330ml bottles.
But wait! There’s more! We felt like these new beers, and there are many in the works as we speak, needed a new look. A new theme to match the creativity within the bottle. So we sauntered down to our retail store and said, “Hey Baylee, can you rock this?” Of course she said yes and of course she rocked it.  Then we took that wonderful art and had it die-cut to ensure that it flows around the body of the bottle. We think it looks fantastic. What do you think?
Ok, that part is out of the way, so let’s sit down with Mike Lackey (Brewing Operations Manager) and Baylee Bonnell (Retail Store and In-house artist) to ask them the tough questions. GLB Marketing Hack: Describe the process behind the two beers
Lackey: Post primary fermentation, we take our beer and add priming sugar and fresh yeast. From that tank we fill our cute little bottles. The yeast will eat the sugar over a 6 to 8 week conditioning period and create magic. Our brewers feel that this not only creates a nice sparkling carbonation that explodes on the tongue, but a longer lasting product that consumers can enjoy today or shelve for some time.
GLB Marketing Hack: How are they different then the regular beers we’ve launched before?
Lackey: Thanks for asking Troy. They are 100% naturally fermented in the bottle. Most other beers are carbonated artificially – which is fine – but not what we were looking for with these styles.
GLB Marketing Hack: Tell us about this new bottle conditioned series.
Lackey: We are pretty excited about it in the brewhouse. It’s always fun to be handed the ability to experiment with a new project. To be honest, we’re learning a lot on the job which is always great to be trying new things. It’s also been great to work with some talented brewery folk on the look and packaging of the new series to match the spirit of which it was brewed. GLB Marketing Hack: Where did the inspiration come from for your art on both bottles?
Baylee: The inspiration for the Raspberry Universe label came from an article I stumbled across on the internet titled “Galaxy’s centre tastes of raspberries and smells of rum, say astronomers…” The article explained that while astronomers were researching for the building blocks of life they stumbled across a substance called ethyl formate which is the chemical responsible for the flavor of raspberries. I came across this article around the time I was assigned to create a label for a “Raspberry Saison” and thus the universe lined up and Raspberry Universe was born.
The design for “No Chance with Miranda” pays homage to my first nations background as far as the style of artwork and I wanted to portray a strong female presence in the work along with a bright and inviting colour palette.
GLB Marketing Hack: What do you think about having your art on a beer label?
Baylee: I’m truly very honoured to be a part of creating/designing GLB labels for the 7 Barrel Series releases. GLB has been built on integrity when it comes to their art direction and has and will be a focal point for consumers. And the beer ain’t so bad either…
GLB Marketing Hack: Which bottle will you reach for first?
Baylee: The first label I started working on was Raspberry Universe Saison. So that one. It started out as a painting and later would be translated into a label. I was very excited to work on it because of the coincidental article I found. I really couldn’t believe it, along with others whom genuinely thought I was insane explaining my logic behind it.
GLB Marketing Hack: What’s next?
Baylee: You can absolutely expect to see more labels from me for the 7 Barrel Series beers and maybe even some more artwork inside the brewery, you’ll just have to come see! 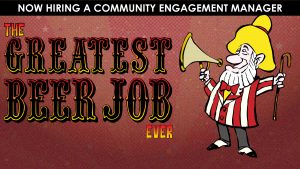 January 25, 2022
We are looking for a social media superstar. Someone to be the GLB brand voice, the content creator...
Read More 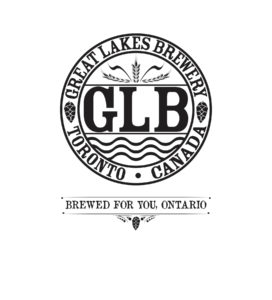 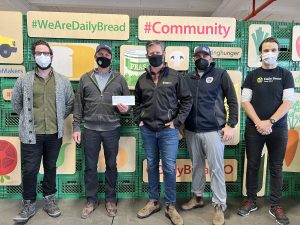 $6620 Raised in Hops for Hunger Campaign

12 Years Ago, A Brand Was Born